The World BBQ Championships are coming to Limerick in October!

Limerick is set to be the barbecue capital of the world next October, when Ireland hosts the World BBQ Championships. The biannual event is expected to be attended by more than 100 teams, each made up of six experts in the art of cooking over fire.

Limerick beat Rome and Vilnius in the race to host the 2017 championships, which will take place in the People’s Park on October 13th-15th. In addition to the 600 competitors and their supporters, 150 certified judges  will travel to Limerick for the event, and more than 40,000 spectators are expected to attend.

“This is not your sausages and burgers, it’s the Cordon Bleu of barbecue,” says Patrick O’Sullivan, who is president of the World BBQ Association (WBQA), formed in 1996.

The association is active in almost 50 countries across Europe, North and South America, Africa, and Asia, and has its administration office in Limerick.

On March 25th, the WBQA opened its training facility, the World BBQ Academy, in County Limerick, and its first students came from the Hospitality & Tourism Department of Limerick Institute of Technology (LIT), who participated in a two-day programme.

The Academy will work with culinary students, coach amateur teams who want to take part in competitions, and will also train and certify judges.

Teams at the WBQA World BBQ Championships will compete in eight categories, cooking chicken, fish, beef brisket, pork ribs, pork shoulder, vegetarian, dessert and Chef’s Choice. The ingredients will be Irish, and each team will be presented with an identical basket of ingredients to work with.

Pre-prepared sauces and readymade marinades are not allowed, but the teams are allowed to bring their own herbs and spices.

“We want each team to develop their own particular culinary style, which comes from their culture. It’s not just American or Irish cooking,” Patrick says.

The prizefund for the event is €15,000, a third of which will go to the winning team, who will have the best combined score. There will also be category winners.

There are already ten Irish teams registered to compete at the event (the Irish BBQ Association, an affiliate of the WBQA, ratifies the Irish entrants).  At the last WBQA World Championships, in Gothenburg, Sweden, the highest placed Irish team finished 15th.

“Fire, Food, Friendship and Fun” is the WBQA’s motto, and it supports sharing information and promoting interest in barbecue. In addition to the barbecue strongholds of the US and South America, the association has membership in many countries where competitive barbecue is at a developmental stage, including Libya, the Ivory Coast and Vietnam.

“The WBQA is an international not-for-profit organisation, and we celebrate the culinary and cultural differences of every country, promoting each unique style of cooking and presentation, through the sport of barbecue,” says Patrick.

The two-day event in Limerick will be managed by the the WBQA and hosted by its affiliate, the Irish BBQ Association (IBBQA). It will be open to the public, and the teams will be offering samples of their dishes to those who attend. 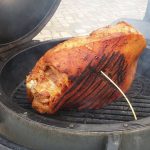